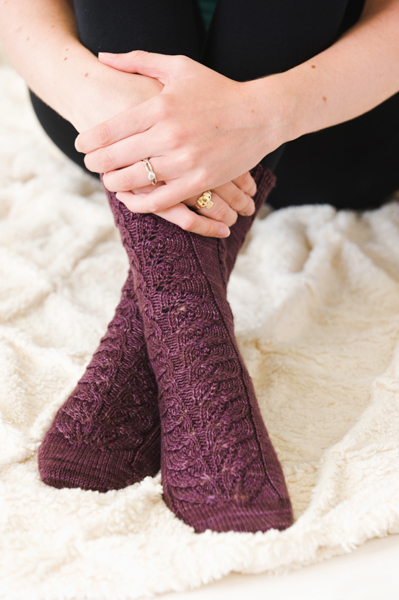 This sock pattern was designed to reflect a row of leaves. The tonal yarn makes them look as if they are changing right before your eyes.

The leg height and foot length of all sizes are adjustable to fit and preference. When pattern directions differ by size, the numbers will read as follows: Small (Medium, Large). When only one number is given, it applies to both sizes.

sssk= slip 3 sts as if to knit, then knit the 3 sts together through the back loops

For foot and leg in stockinette stitch, work instructions followed by k28 (32, 36).

If you wish to have the pattern on the front and back of the leg, work round instructions twice.

You can accommodate instructions for Magic Loop or 2 circulars by in the beginning using the front for Needles 1 and 2 and Needles 3 and 4 for the back.

The heel is worked over Needles 3 and 4, and once you begin the gusset, the beginning of the round is moved, and Needles 1 and 4 will be on the front, and Needles 2 and 3 will be in the back.

Using a toe-up cast-on (I prefer Judy’s Magic cast-on method), CO 28 (32, 36) sts. Divide sts evenly on the needles. If using DPNs, you may need to move sts from needle to needle from time to time to accommodate the stitch pattern. Place a stitch marker to note the beginning of the round.

Knit across the sts on each needle.

Rnd 2: K across sts on all needles.

Note: If you prefer a more pointed toe, cast on fewer sts and work more rnds until increased to 56 (64, 72) sts total. If you prefer a different toe, by all means, work your toe preference until you have the desired amount of sts.

Begin working Foot. Needles 1 and 2 will be the top of the foot (working in Stitch Pattern) and Needles 3 and 4 will become the sole stitches (working in stockinette). Begin working from the charts or from the written instructions.

In this section, Needles 1 and 2 will continue the sock in Stitch Pattern, working up the foot and towards the front of the leg. Needles 3 and 4 will be increasing and forming the Instep Gusset on the sole part of the foot, working towards the heel of the sock.

Rnd 1: Needles 1 and 2: Continue working the next rnd in pattern.

Begin turning the heel. Work over Needles 1 and 2 once more for top of Foot sts. Continue working back and forth over Needles 3 and 4 to turn heel.

Note: Make special of note the last round worked in pattern. You will continue working that same round once the heel has been turned.

Resume working on all 4 needles, paying careful attention to working the rest of the same round in pattern left off on heel turn.

The sample is shown with the pattern on both the front and the back of the sock.

If you wish to keep the back of the leg in stockinette, continue working in pattern as establish.

Either way you choose to do the leg, you may need to pick up a stitch on either side to close up any holes there may be, remembering to k2tog or ssk with an end stitch to maintain the correct stitch count.

Work leg until 1½-2” less than the entire desired length of the sock.

Bind off all sts in pattern using a stretchy bind-off. 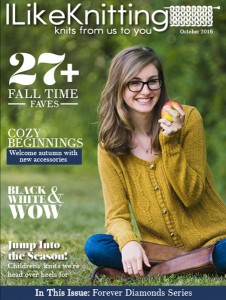 Send this to a friend
Hi,
I thought you might find this interesting:
Changing Leaves Socks