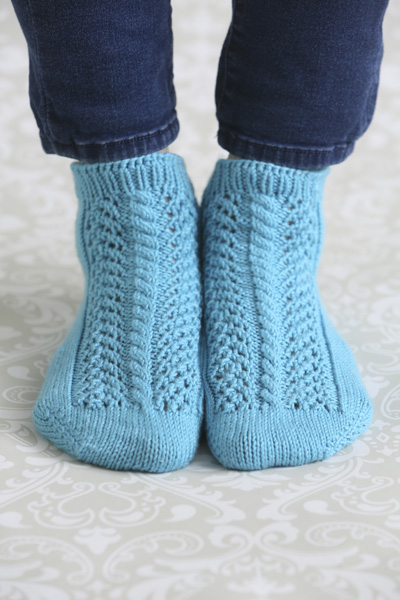 Cozy socks are a hit all year ‘round and these robin’s egg blue socks are no exception! The combination of lacy, open stitches and chunky criss-crossing cables makes this pattern a wonderfully unique one for any occasion.

C4F: Slip 2 sts from left needle to cable needle and hold at front. Knit 2 sts from left needle, knit 2 sts from cable needle.
ssk: Slip 2 sts from left needle to right needle as if you knit (one at a time), insert the left needle through slipped sts in the front and knit them together.
M1: Make one; the make one creates a new stitch between two existing stitches. This stitch is created by picking up the strand of yarn that runs between the stitch you just knit and the next stitch on the left needle, then knitting it.
W&T: Bring the yarn to the front of work (as if to purl), and slip one stitch from the left needle to the right (again, as if to purl). Then, turn the work over. The yarn is now again at the back of the piece and left and right needles have changed places. Bring the yarn to the front, and slip one stitch from the left to the right needle. The wrap and turn is now complete; if the next stitch is a knit stitch, remember to return the yarn to the back of the piece before beginning.

When wrapping st at turning points of short rows, note that sts now have 2 wraps; these sts will be referred to as double wrapped sts.
When working a double wrapped st on a subsequent rnd, pick up both wraps and work them tog with the st which had been wrapped.
Sequence resumes at the same rnd where you left off before the heels.
Continue repeating Easter Socks pattern (from now on both needles) until your sock measures 4’’ (10cm) from heel (heel included). Work ribbing pattern for 10 rnds in total: *k1, p1*.
BO, weave in ends and block it. 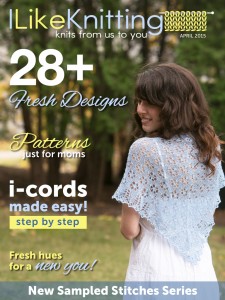