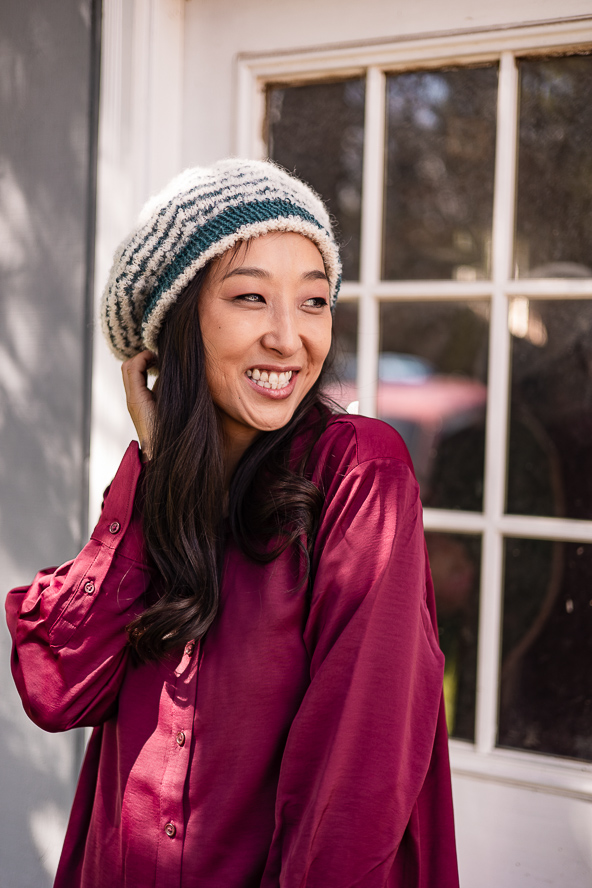 kf&b = knit into front, then back of next stitch (1 st increased)

M1 = Insert the left needle from back under the top strand between the two needles, then knit into the front of the stitch to twist it (1 st increased)

The beret is started at the first crown and worked top-down to the ribbed brim, flowing directly into the ribbed brim for the second color beret (without casting off). You will then continue from the brim-up to finish the second beret, ending at the crown. This creates a perfectly symmetrical, reversible beret.

(beginning from the center top and working down to brim)

With CC; cast on 8 sts on DPNs, place marker and join to begin working in rnd.
Setup Rnd: Knit

Switch to MC, then continue.

Note: you will be alternating between CC and MC every 2 rnds until Rnd 63.

Note: once you have too many sts for the DPNs, switch to circular needle.

After Rnd 63; cut MC and continue using only CC.

Cut yarn. Leave work on circular needle and set aside.

Cast on 1 stitch, leaving a short tail. (K1, P1, K1, P1, K1) into the stitch. (Turn. P5. Turn. K5.) twice. Pass the first 4 stitches, one stitch at a time, over the last stitch on the right needle. Cut the yarn, leaving a short tail and pull the tail through the remaining stitch. Tie the two tails together into a tight double knot to cinch the bobble, but do not cut the two yarn ends.

Using a tapestry needle and the two yarn ends, secure the bobble to the top center of the beret, over the cast on stitches. Also weave in all the yarn ends you’ve created up to this point. Then continue the beret as follows;

Note: To increase the elasticity of the brim, you can optionally carry a matching color of elastic thread along with MC during center Rnds 1-4. This technique was used in the sample shown.

Cut yarn and switch to CC2.

Before continuing; weave in all yarn ends from the brim.

Without cutting CC2, join MC. You will be alternating between MC and CC2 every 2 rnds for the remainder of the beret. Continue, beginning with MC for Rnds 14 & 15…

Before beginning to decrease, weave in any remaining yarn ends from the beginning of the second beret.

Note: once you have too few sts for the circular needle, switch back to DPNs.

After Rnd 75 cut MC and weave in yarn end.

Using CC2; make another crown bobble the same as the first and attach it to the top center of the second beret.

For a more shaped, less slouchy beret; thread a length of MC or elastic thread through the first MC stripe around the top of the brim(s) and cinch just enough to shape the hat, without making the brim too small to fit on the wearer. Hide the yarn tails by threading them into the inside of the beret.