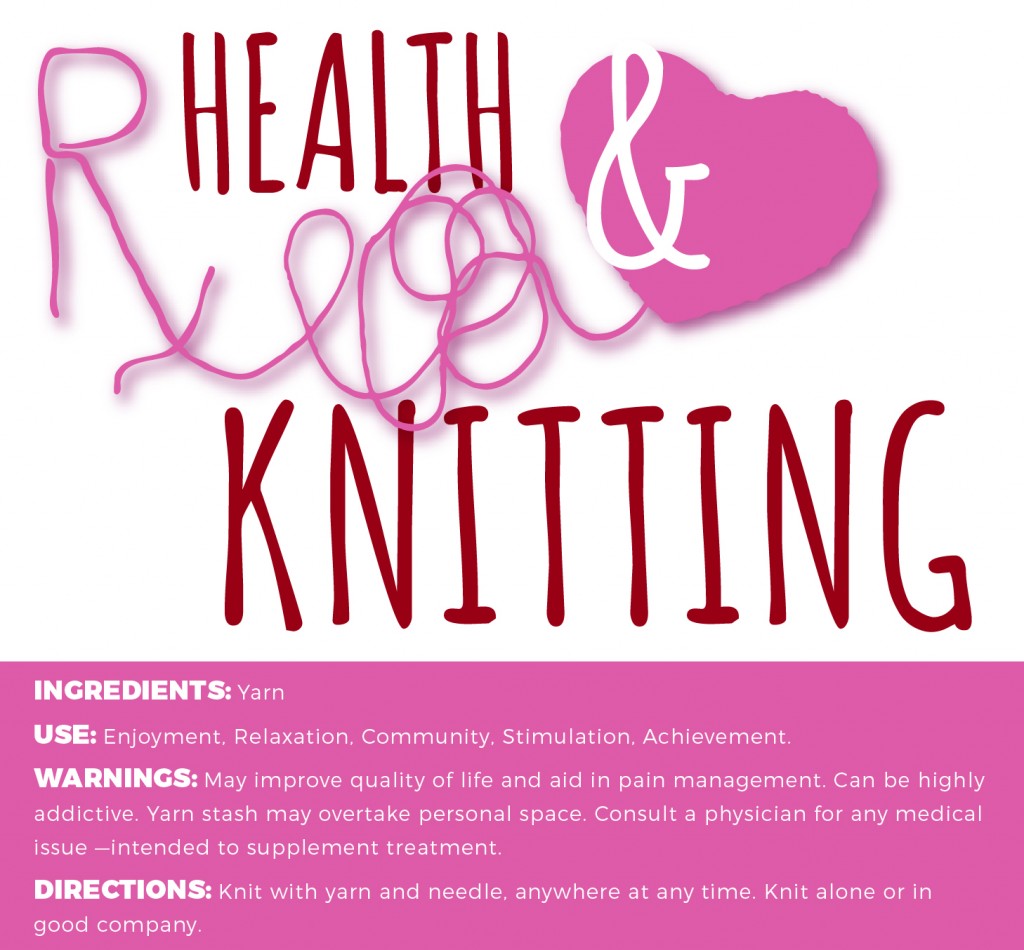 Whether the pain is mental or physical, studies have proven knitting to be a suitable secondary prescription for pain management when paired with other treatment as there are a number of health benefits of knitting. After formal medicinal diagnosis and prescriptions, doctors will often informally tell their patients to simply do something they enjoy in Whether the pain is mental or physical, studies have proven knitting to be a suitable secondary prescription for pain management when paired with other treatment as there are a number of health benefits of knitting. After formal medicinal diagnosis and prescriptions, doctors will often informally tell their patients to simply do something they enjoy in order to get the patient’s mind off the pain and to ease healing.

That’s exactly the advice Tabetha Hedrick, knitwear designer and writer, received. “I had been a knitwear designer for a couple of years prior to my depression,” Hedrick said. “In the darkest days of my depression, I gave up everything I loved: design, reading, hanging with friends, etc. One of the first things my doctor told me to do was make myself do something artistic and small, just 15 minutes a day, every day.

That promise of a small time limit didn’t feel overwhelming or hard to commit to, but it always led to spending more time than planned (which was her purpose, I think). Knitting was what I knew how to do, but I wasn’t allowed to do it on a business scale – I had to get back to the artistic joy of it and that’s exactly what I did.”

Hedrick said she realized that knitting was a secondary factor to her healing by making her feel better. “I found that focusing on something else, something outside of my own brain, enabled me to better focus on the world around me later. As I started to wean off my medication, my knitting remained a constant source of attention that I knew I could turn to,” she said.

A 2013 report in the British Journal of Occupational Therapy stated that knitting more than three times per week significantly increased respondents’ perception of feeling calm afterward. The 3,514 international respondents, surveyed by researcher Betsan Corkhill and her colleagues, also reported that knitting helped them organize thoughts, improved memory and concentration and helped them forget their problems, according to the report.

Of the respondents who suffered from depression, 81 percent perceived that knitting made them feel happier.

“When I started knitting again, just for the pleasure of it, it became a peaceful activity for me,” Hedrick said. “Burrowing my hands in soft yarn, smooth needles and beautiful stitches reminded me that I can create something wonderful in this life, which is the exact opposite of what depression makes you think. It reminded me, stitch by stitch, to be in the moment. It awakened the inner drive we all have to do something simple and purposeful.”

Pamela Northrup said knitting helped her through a dark time as well, even when needles and yarn weren’t available. It was three years ago, when she’d been hospitalized for a suicide attempt.

“One of the things I did when I was hospitalized after my suicide attempt, was to sit, close my eyes and mentally knit. I wasn’t allowed the actual needles and yarn, but even just thinking my way through the motions of knitting was enough to act as a form of meditation for me,” Northrup said.

“That was probably the first time I consciously used knitting as a mental health tool. Since there was no way I was going to be allowed needles and yarn on a locked ward… I decided to try using it as meditation. I sat on my bed, cross-legged, closed my eyes, and just imagined knitting. The feel of the yarn in my hands, the motions as I made each stitch… I was pleasantly surprised to find that it worked.”

Northrup still uses knitting as a tool to aid her emotional health. “I use it in one of two ways – I can grab a simple project and let my hands do something on autopilot while letting my brain deal with what it needs to work through, or if I find I’m getting overly anxious, I can work on something more complex that needs my attention and use that to distract myself and let the anxiety dissipate,” she said.

The focus knitting requires has been shown to improve memory, soothe and calm the mind, and decrease the risk of cognitive impairment as age progresses. A 2012 study of 1,321 seniors found that those who engaged in crafting, computer activities, playing games and reading books were 30 to 50 percent less likely to have mild cognitive impairment than those who did not.

Research aside, sometimes personal experience speaks for itself. “I still can’t pinpoint the moment when I became healed from depression, nor can I identify the exact changes that knitting caused in my brain,” Hedrick said. “All I know is that, without my knitting, without the heartfelt tradition of the ages coursing through my hands, I might not be as healthy, or as whole, as I am right now.” 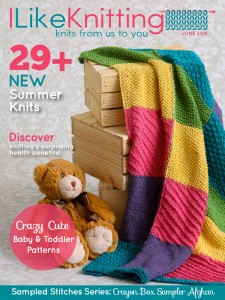 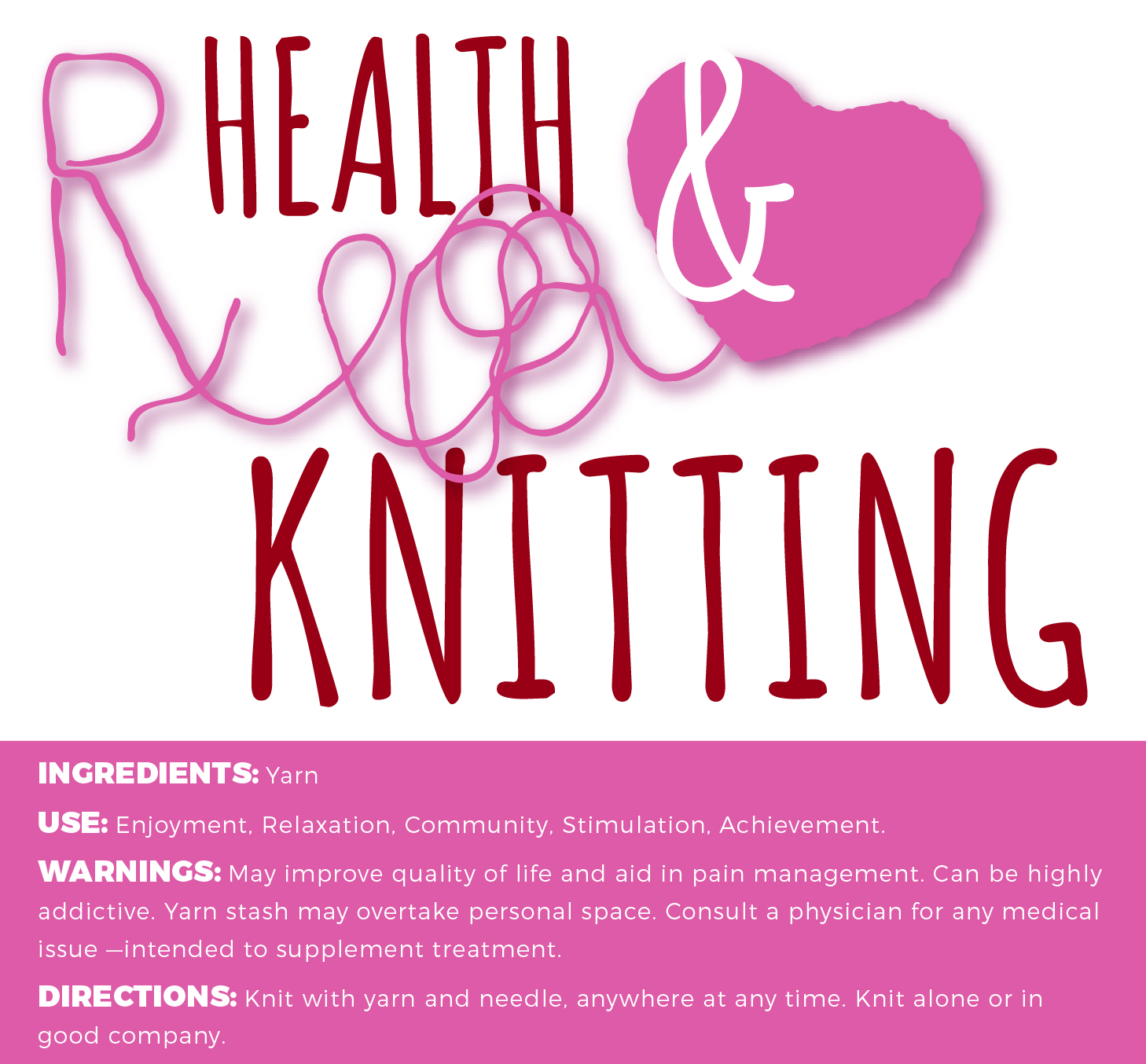