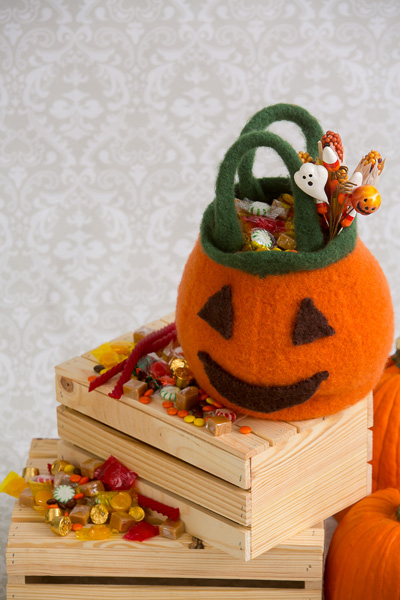 This felted Pumpkin Treat Bag is essential for Halloween trick-or-treating. The easy stitch pattern works up quickly, and the felting process adds strength to the design in order to hold as much candy as possible. Plus, the base of the pumpkin is set in so the pumpkin can be set on a post or sit flat on a step, perfect leaving candy out on the porch.

The facial features are created using color 3.
Cast on 40 stitches.
Row 1: K20.
Row 2: P20.
Repeat rows 1 and 2 until work measures approximately 10 inches. The facial features will be cut from this piece of felted material. These pieces may be buttoned to the pumpkin so they may be removed after Halloween or set with fabric glue for a more permanent look.  If buttons are used, the buttonholes are made using a sharp scissor. By making small incisions you can ensure the face can be removed and the buttonholes brushed out so the pumpkin may be used through Thanksgiving and recycled year-to-year using different cut outs for the facial expression.
Leaves to complement the pumpkin may be made from a 20 stitch x 20 row swatch of the green, two strands held together, cut the form out and stitched on later.

Prior to felting weave in ends.
Felt in top loading washer with an agitator and a few pairs of sneakers in zippered or knotted off bags to prevent them from directly touching the yarn.  Set the washing machine for the longest wash cycle on hot water with the smallest water requirement. Use detergent to aid in the process of felting.  The amount of time and number of cycles to felt the knitted items will vary, do not leave it unattended too long and check it often.