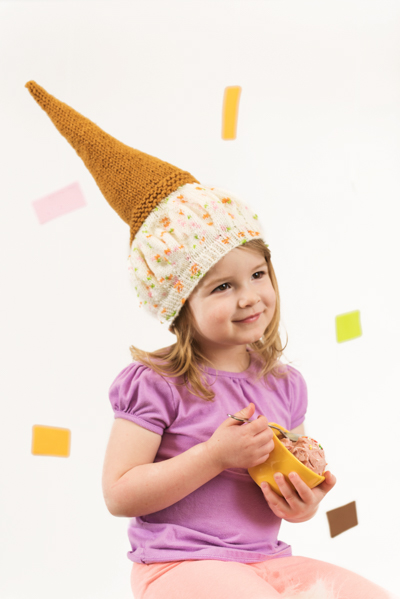 Brainfreezes are just a pesky side effect of scarfing down your favorite warm weather treat, but it won’t hurt when this ice cream cone goes to your head! Knit from the bottom up, this adorable, silly hat looks like an upside-down cone and will delight your fellow ice cream fanatics.

Hat is knit from the bottom up with the “scoop” being worked in the round and the “cone” worked back and forth in rows. While the cone could be knit in the round, the fabric’s inherent spiraling made the round join too visible on the front of the hat, while working in rows keeps the center back seam in the center back.

With smaller needles and A, CO 88 sts, join for working in the round, being careful not to twist. Use stitch marker to denote start of rnd.

Rnd 4 and all remaining even numbered rnds: Knit.

BO all sts, leaving a long tail to sew up the seam.

Thread Cone tail into tapestry needle. Weave it in and out of the 5 BO sts and pull tight to make a point.

Sew center back seam of Cone with mattress stitch.

Send this to a friend
Hi,
I thought you might find this interesting:
Brainfreeze Hat