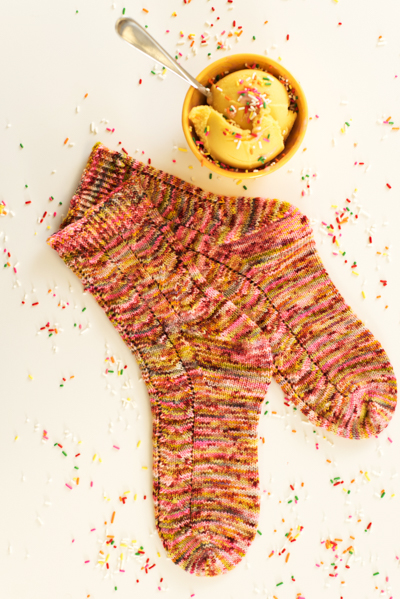 This design was created with beautiful variegated yarn that looks just like the colors of yummy sprinkles. The mountain stitch pattern resembles the mountains of sprinkles everyone likes to put on their ice cream. You can never have too many sprinkles on your ice cream!

ssk= slip 2 sts as if to knit one at a time, then k2tog through the back loop

sssk = slip 3 sts as if to knit, then knit the 3 sts together through the back loops

Rnd 2 and all even number rnds: Knit all sts.

You can accommodate the pattern for Magic Loop or 2 circulars by using Needles 1 and 2 for the front and Needles 3 and 4 for the back.

The written instructions are for the first half of the stitches.

If you wish to have the pattern on the front and back of the leg, work rnd instructions twice.

If you prefer a different toe, by all means, work your toe of preference until you have the desired amount of sts.

Begin working the Stitch Pattern from the charts or written instructions.

Cont working the foot as est until the piece meas 2½” shorter (LESS) than the entire desired finished foot length.

In this section, Needles 1 and 2 will cont the sock in the Stitch Pattern up the foot and towards the front of the leg. Needles 3 and 4 will be increasing and forming the gusset on the sole of the foot working towards the heel of the sock.

Resume working on all 4 needles, paying careful attention to working the rest of the same row in pattern where you left off to turn the heel.

Work leg until piece meas 1½-2” shorter (LESS) than the entire desired length of the sock.