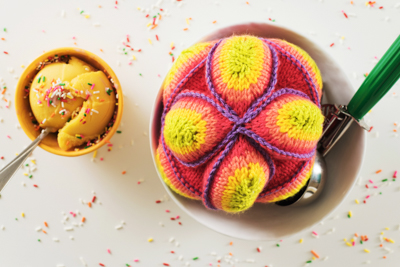 Is it wrong to think your knitting looks delicious? This stuffed puzzle toy makes a great travel project, as the 12 wedges are made individually. Everything comes together at the end when they’re joined together using crochet slip-stitches. Unlock the mystery!

This stuffed toy is made of 3 segments, which are in turn each made of 4 wedges – 12 wedges total. It is stuffed and joined as you go. Simple crochet slip stitches join the wedges together to make the segments.

With A, CO 5 sts. Divide as evenly as possible among 3 DPNs and join to work in the rnd.

With E, make a slipknot and place on crochet hook.

Rnd 1: Beg at first purl bump from Rnd 16 of each Wedge and working counterclockwise around each Wedge, *loosely sl st in 20 sts along side of Wedge; rep from * 3 more times (4 Wedges total), join with sl st to same purl bump as beg sl st was worked, being careful not to twist Wedges.

Rnd 2: Turn, beg with unworked side of last Wedge worked in Rnd 1, *loosely sl st in rem 20 sts along side of Wedge, sl st in last sl st made from Rnd 2 on next Wedge; rep from * 3 more times. Fasten off.