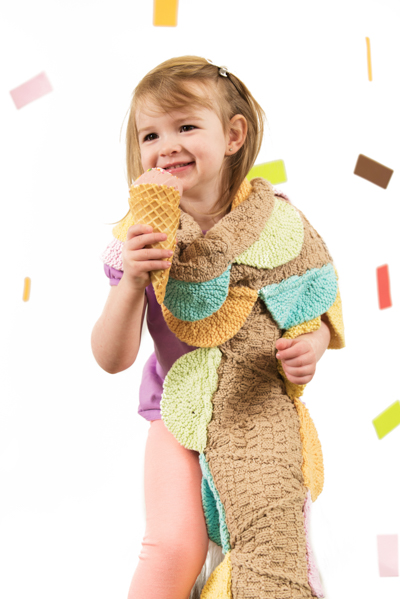 Ice cream calories don’t count when they are decking out a special summer scarf. Celebrate your love for a sweet scoop—or three—of ice cream by working up this whimsical project. Given the modular cone design, it can easily be made larger for an adult or smaller for a younger child.

If you elect to make up the pattern by knitting each cone to the other as the scarf is worked, as was done for the sample, rather than knit them individually and seam each one, attach the cones to each other as they are worked by substituting the last stitch of each odd row with an edge stitch as follows:

When attaching the cones to each other on the odd rows of even numbered cones, with yarn in back, pass last stitch on left needle over to the right, pick up two legs of the last stitch on the completed cone, purl this as a stitch, pass slipped stitch on right needle over the purled stitch.

K6&twist: K6, then while holding the 6 sts in place, circle the tip of the right needle away from you, down and around and back up to the starting position. The sts on the right needle will be curled around the needle.

To scale the project for a smaller child, use DK weight yarn and US size 4 (3.5 mm) needles.

The scoops of ice cream are worked individually then grafted on the WS of each scoop to each cone as the cones are knit.

When joining the cone being worked, insert the left needle to the side of a completed cone to join it to the working needle. The join is done on odd numbered rows starting with Row 3 because the last stitch on the needle when making the vertex of the cone is the first stitch of the top of the next cone; this is considered Row 1, at which point there is no need to join.

When picking up stitches along the back of a scoop of ice cream, pick up along the line formed by the 3-needle bind off. Begin picking up stitches, 3 sts in from the edge of the scoop. To pick up the required number of sts, 25 sts, pick up a few extra sts as you approach the middle of the row, leaving 3 in from the opposite edge. These 3 sts are used in the final assembly to connect the scoops to each other to eliminate gaps along the edge.

After completing each cone, the yarn from the scoop may be used to whip stitch the ruffle edge of the scoop more securely to the cone, thereby hiding the cast-on seam and keeping the scoop flat against the cone.

The cones may be worked individually and grafted together using a crocheted or blanket seam.

When knitting the scoops, if it is too difficult to pull through all 12 sts with the crochet hook, do it in 2 steps rather than at the end of 11 repeats of Rows 1-6. Do it after the 6th repeat, place the looped stitch on the left needle and after completing the 11th repeat, use this stitch to pull through the edge stitches. The result will be a second grouping of stitches (see green scoop), however this will not be noticeable when the scarf is worn.  It’s more important to be consistent in the manner in which the scoop stitches are pulled.

The first stitch of each row of a cone is always slipped as if to purl.

To create an even chain on the RS of the work between each cone, when working even rows of the cones, slip the first stitch of each row with the yarn between yourself and the work so the slip stitch is not crossed with the working yarn.

Row 7: *K6&twist; rep from * to facilitate joining the scoop to the cone, a lifeline may be inserted along this row.

With crochet hook, pick up loops formed along each ridge of the inside edge of the work, it’s the shorter arch of the knit rows, pick up first st on left needle, yarn over, pull working yarn through all 12 loops, tighten to compress and place loop on the right needle.

Using 3-needle bind off, with the right sides facing each other, BO all sts.

Note: For all subsequent cones, the first stitch is the last stitch of the previous cone therefore, pick up 25 sts off the WS of the scoop to which you are attaching the cone.

You can elect to knit the cones individually, following the pattern verbatim and stitch the cones together when finishing the scarf.

On odd rows, except Row 1, the knit stitch at the end of the row is replaced with the edge stitch as described in the Special Stitches section for all cones after the first cone.

With tail from Scoop, whip stitch along edge of the ruffled edge of the scoop to the Cone, taking care to not allow the stitches to show on WS.

If Cones are worked individually, with crochet hook, crochet the cones together using a single crochet crab stitch.

If the Scoops have gaps between them, use the cast-on tail or scrap yarn to whip stitch 3 sts on one Scoop to 3 sts on the adjoining Scoop.

Blocking is accomplished by resting the scarf in a sink of warm water, 110 degrees F. When the scarf sinks into the basin, allow it to sit for approximately 20 minutes; do not agitate the water.

Remove the scarf from the sink, unroll it, and place it between two large bath towels. Beginning at one edge, roll the three layers and squeeze the rolled-up set of three layers to release some of the water.

Block the scarf and allow to dry.