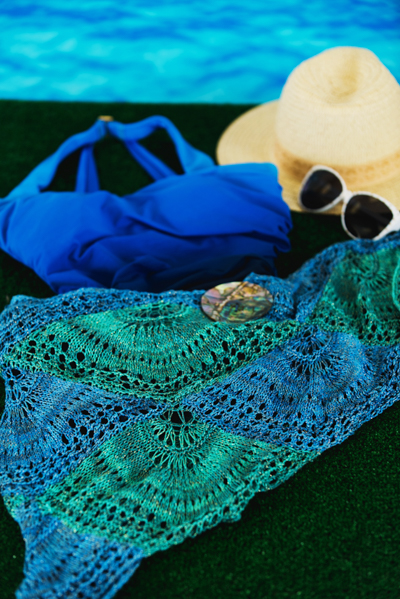 Looking for something dreamy to wear at the pool or for a romantic walk at the water’s edge? This sarong is in a league of its own, with shimmering gleams peeking out from the rayon yarn’s metallic undertones. Plus, the sturdy material can hold its own, so you can enjoy the ocean waves while still looking fabulous.

Each scale motif is worked individually from a cast-on row which is either created by picking up all sts or half the sts of the motif below depending upon which scale is being knit.

Cast on using a knitted cast-on to maintain the lose nature of the first row and prevent puckering.

The first stitch of each scale motif is slipped as if to purl.

When breaking the yarn on each motif repeat, leave a 4″ tail which will be used to secure the completed motif to the motifs above it when they are cast on. Knot the tail to the work and work it in behind the small gap created between the end of one motif and cast-on edge of the next.

Test knitters found it easiest to work with Rayon Metallic using bamboo needles rather than metal or plastic.

Second Stripe of Scale Motif and all subsequent stripes of scale motif except top stripe motif;

First scale motif of each new stripe: Using the knitted cast-on method, using other color, CO 30 sts,  with RS facing pick up 30 sts along edge of first motif of previous stripe, including the 2 live unworked sts from Row 36 – 60 sts.

Last scale motif of each new stripe: with RS facing, including the two live stitches, pick up total of 30 sts and using the knitted cast-on method, CO 30 additional sts. – 60 sts

Third and all subsequent stripes of scale motif except top stripe motif:

Second scale motif and all subsequent scale motifs until last scale motif of a given stripe, with RS facing, pick up total of 60 sts beginning with Row 35 of motif from previous stripe of scale motif, including the 2 live unworked sts from Row 36 of the last motif. – 60 sts

As with previous stripes, move to next motif and with RS facing, pick up 60 sts along the edges of the motif from the last row. When one motif rem, pick up 30 sts from last motif, using the knitted cast-on method, CO 30 sts and begin setup row.

Along the top edge, pick up and knit approximately 26 sts per motif including the center 14 sts which were left as live sts on the stitch holders. Beginning with the front left corner scale motif 3 sts in from the edge and proceeding towards the right will create a flat corner where the scale motif meets the waist band.

Row 1: With RS facing, pick up third st in from the corner, pick up next 9 sts, knitwise,

Flip work so WS is facing.

With WS facing, purl the live sts from stitch holder onto right needle.

Flip work so RS is facing.

With RS facing, pick up 12 sts from edge knitwise, taking care to pick up the top of the scale motif from the last row of full motifs so there is no visual gap between the waist band and the top of the motif from one stripe od scales below. This will help stretch the motifs out as the garment is worn thereby creating a longer line of the motif repeat.

Continue picking up sts as stated, flipping between RS and WS, to maintain the stitch pattern, approx. 125 sts on needle. When 2 sts rem, turn work.

Row 4: Knit across row, picking up all rem sts on both ends so as to create mitered corners on the left and right top border, approx. 130 sts on needles at this point.

Using needle and thread attach the smaller button to the back of the public facing button to form a cufflink which is then used to secure the button through the double yarn over loops where needed to close sarong at waist. The button is not sewn to the sarong so it may also be used as a shawl or to wrap up your wet hair after a swim.

Blocking is accomplished by resting it in a sink of warm water, 110 degrees F. When the sarong sinks into the basin, allow it to sit for approximately 20 minutes.

Remove the sarong from the basin, unroll it, and place it between two large bath towels. Beginning at one edge, roll the three layers and squeeze the rolled-up set of three layers to release some of the water.

Block the sarong and allow to air dry.