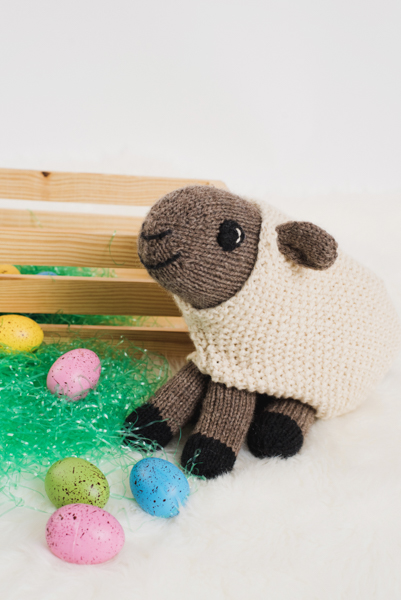 This lamb softie does double duty: she’s a sweet and huggable friend, but when you “shear” her by removing her fleece, she becomes a tote that’s perfect for Easter egg hunts. Once the hunt is over, just tuck in her handles, slip her fleece back on and she’s all ready for cuddles.

This pattern is worked in the round from the nose of the sheep to the rump. The Sheep’s ears, legs, tail, and inside of the tote and handles are made separately and attached at the end. The fleece is also worked separately and fits over the Sheep.

Note: You should be at the middle of the Sheep’s back and this will be your new end of rnd. From here on you should turn the work and knit the body of the Sheep flat. This will form the opening at the back that makes him a tote. Depending on the length of your DPNs, you may want to switch to a circular needle at this point.

Rep Rows 41-42 until the Sheep measures 12.5” from the tip of its nose, ending with a RS row. Rejoin yarn to work in the rnd again.

Fold in half widthwise, with RS together. Seam up the sides to make a pocket.

Rnd 1: Kfb 3 times, distribute evenly over DPNs and begin to work in the rnd. (6 sts)

Rnd 1: Knit, distribute evenly over DPNs and join to work in the rnd.

Rnd 1: Kfb into every st. Being careful not to twist sts, distribute evenly over DPNs and begin to work in the rnd. (6 sts)

BO, leaving a long tail that can be used to sew the Ear to the head or the Tail to the rump.

Rnd 1: Knit, distribute evenly all sts over 2 DPNs and hold them parallel to each other. Begin to work in the rnd this way (your work will be a flat tube).

K every rnd until each handle measures 12”.

Continue to knit every row in est rib pattern until piece meas 11” from CO edge.

Insert tote lining into the tote opening at the top of the Sheep’s back, lining up the edges. Using a yarn needle and a length of MC yarn, attach the bottom of the tote lining to the inner belly of the Sheep with a few stitches.

Stuff the Sheep, and then use tapestry needle and MC to seam all around the upper edges of the tote lining and the tote opening on the Sheep’s back.

Lightly stuff the legs and sew them to the body.

Sew the back legs on 2” from the back end of the Sheep.

Sew the front legs on 6” from the front end of the sheep.

Attach ears on each side of the head, 5 sts from the top of the head in Rnd 26.

Attach tail on the rump of the Sheep.

Sew handles to the Sheep, at the tote openings.

Sew eyes onto Sheep’s face. Embroider on a white “V” sideways for a highlight.

Fold fleece in half, right sides together. Do not sew either the CO edge or the BO edge. Measuring from the CO edge, sew a 3” seam along the bottom front of the fleece.

Measuring from the BO edge, sew a 3” seam along the bottom back of the fleece.

Turn the fleece right side out.