A snazzy bottle holder with a shoulder strap is a great way to make sure you always have your water bottle handy. The yarn carrier absorbs the condensation, so you can toss it in the car or into a tote bag without worrying about getting things wet. The easy lace pattern expands to fit any size bottle and an I-cord provides a sturdy strap.

S2kp: Slip 2 sts together as if to knit, k1, pass both slipped stitches over knitted st.

Using DPN or circular ndl, pick up and knit 4 sts at CO row. *K4, slip the stitches to right end of needle (this is I-Cord)*, rep until strap is about 30-35” [75-87cm], lightly stretched.
Increase the length if the wearer is taller – note that the bottle’s weight will cause the strap to stretch.
Attach I-Cord to opposite side of CO row.
Weave in ends. 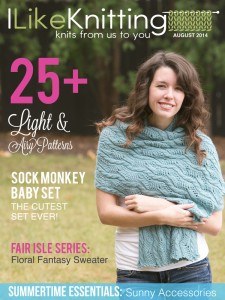