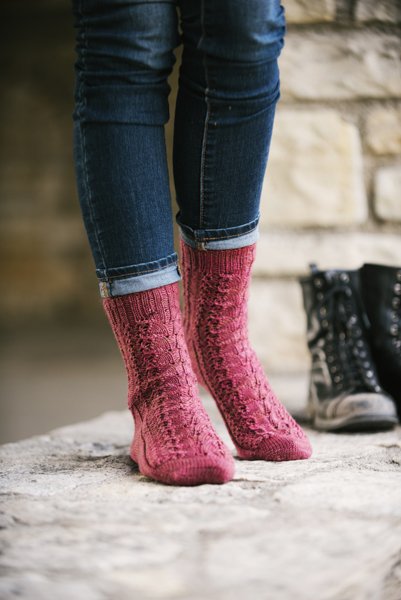 The shade of ripened cranberries just before their fall harvest inspired the deep color of these socks. Not only does the yarn have just the right pop of fall flair, the distinctive stitch pattern will make you glad to kick off those shoes and show off your cozy style.

Size: Small (Medium, Large), approximate 6¾ (7¾, 8 ¾)” circumferences around the foot and ankle with the leg height and foot length of all sizes adjustable to fit and preference.

ssk= slip two stitches as if to knit, one at a time, k2tog through the back loop

Note: The written instructions are for the first half of the stitches.

To have the pattern on the front and back of the leg, work round instructions twice.

The socks are worked from the toe-up. The pattern is written for DPNs referring to Needles 1-4.

Note: If using DPNs, you may need to move sts from needle to needle from time to time to accommodate the Stitch Pattern. Needles 1 and 2 are the top of the toe sts. Needles 3 and 4 are the bottom of the toe sts.

Note: Needles 1 and 2 will be the top of the foot (working the Stitch Pattern) and Needles 3 and 4 will become the sole stitches (working in St st). Begin working from the chart or written instructions, repeating Rnds 1-8.

Cont working in est patt until Foot meas 2½” shorter (LESS) than the entire desired length of your foot.

In this section, Needles 1 and 2 will cont in Stitch Pattern up the Foot and towards the front of the leg. Needles 3 and 4 will be increasing and forming the instep gusset on the Sole of the foot working towards the heel of the sock.

Work over Needles 1 and 2 once more. These will hold the top sts.

Cont working back and forth over Needles 3 and 4 for turning the heel.

Note: Make special note of the last rnd worked in Stitch Pattern as you will cont working that same rnd once the heel has been turned.

Resume working on all 4 needles, paying careful attention to working the rest of the same row in Stitch Pattern where you left off to turn the heel.

Note: The sample is shown with the Stitch Pattern on both the front and the back of the sock.

Either way you choose to do the leg, you may need to pick up a st on either side to close up any holes there may be, remembering to k2tog or ssk with an end st to maintain the correct st count.

Work Leg until meas 1½-2” shorter (LESS) than the entire desired length of the sock. 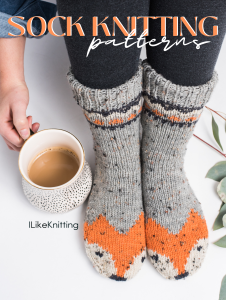