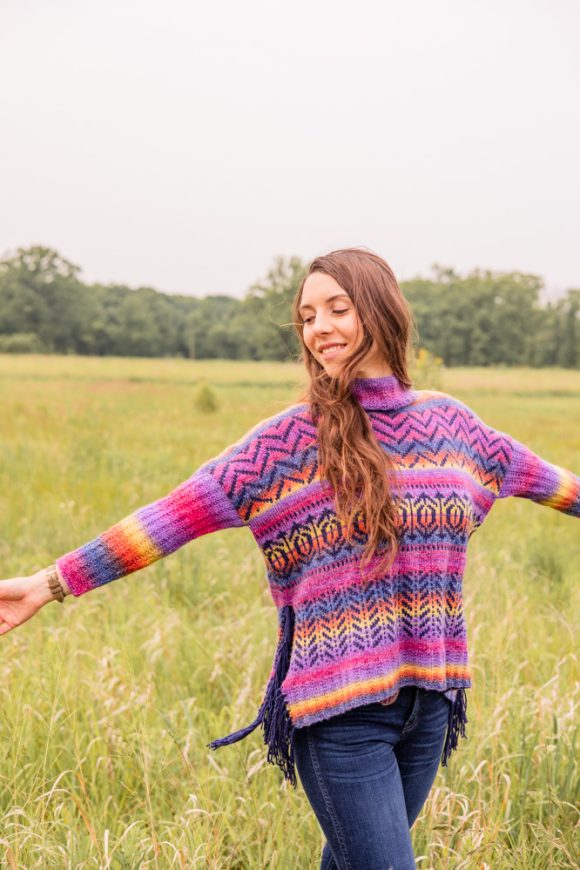 Solara takes advantage of the color transitions in a self-striping yarn that creates a sunset color background for a simple geometric colorwork pattern. The entire garment is worked bottom up, in the round, utilizing steeks for the deep split hemline and sleeve openings. After cutting the steeks and seaming the shoulders, sleeves and neck stitches are picked up and knit in the round in a broken rib pattern. Finally, fringe is attached to the side slits to highlight the deep slip hemline and to add a boho detail to this garment.

BOR – beginning of round

To maximize the color transitions in the Colorburst yarn, alternate between 2 balls when working the body of the swoncho. Use a single ball for each sleeve, starting at a similar color sequence.

Set aside on a spare needle or waste yarn.

Work same as for the Back Ribbing. Do not break yarn.

Set up side slits steeks:

Start after the Front Ribbing piece, and work across the Back Ribbing, joining them in the round and adding Steeks as follows:

Continue to work flat for Front and Back, as follows:

Work in Stockinette sts for 7 rows. BO all sts.

With WS facing, join MC after bound off neck sts.

Reinforce steeks using preferred method along the 3rd and 5th stitch column. Cut the steeks open along the 4th column of stitches in between the reinforced columns using sharp scissors. Fold steek edges toward WS and whip stitch in place using tapestry needle.

Steam or wet block garment prior to seaming. With RS facing, line-up Right and Left Shoulders with the Back. Using tapestry needle, seam shoulders.

With RS facing and smaller needle, join MC at the Right Shoulder seam.

With smaller needle, join MC at the underarm.

Work in Broken Rib for 7 rnds.

From CC cut 12” long strands of yarn. Using 2 strands at a time and a crochet hook, fold over the strands attaching them to the edge of the split hem. Repeat every ¼” all around the split hem edges. 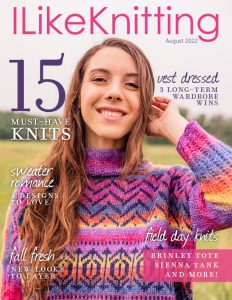