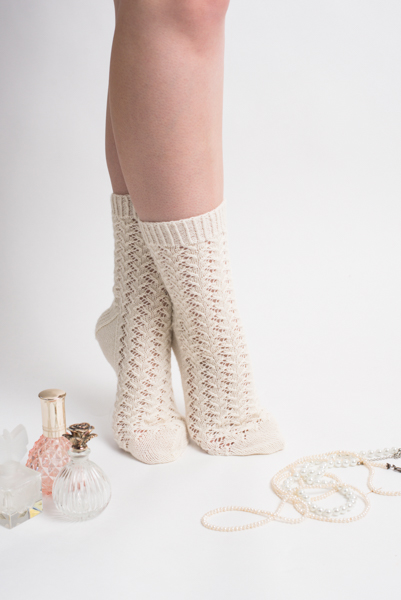 The Carmine Lace Socks are an elegant way to keep your feet warm. The lace pattern might look complicated but is in fact quite easy! Knit from the top down, the lace travels down the sock leg to the toe. Complete with a twisted 1/1 ribbed cuff that emphasize the delicate texture of the lace pattern, you’ll never want to take these beauties off!

This pattern is worked in the round from the cuff down. The socks feature a heel flap and gusset construction. The cuff has a twisted rib.

Cont in est patt until Leg has reached desired length. When you reach Row 6 of the Lace Chart start with Row 1 again.

Rep Row 5-6 until all Heel sts have been worked.

Set-up Rnd: Pick up sts along side of heel flap, work next row of Lace Chart across instep (each row of the chart is repeated 5 (6) times across the instep), pick up same number of sts along other side of heel flap, k across half of heel. New BOR is in the middle of the heel.

Rnd 2: K to instep, work next row of Lace Chart across instep, k to end.