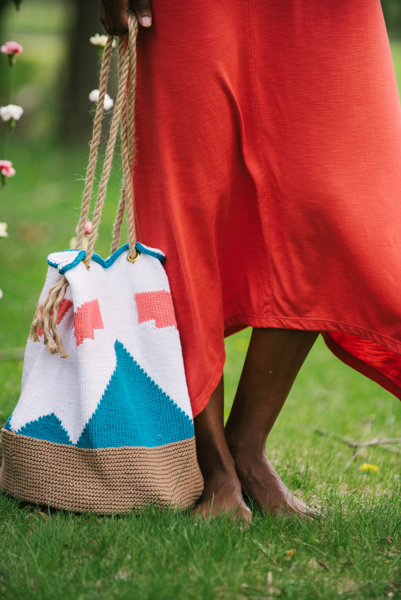 Tackle intarsia colorwork with this beginner-friendly bag and its colorful geometric design. The roomy size and drawstring handles of this bag make it ideal for all the fun outings planned for your last days of summer.

Garter St (worked in the rnd)

Next Row: Purl, purling just once into double yo, dropping second loop from needle.

Begin working from chart, using the intarsia technique of twisting each new color together with the old color, joining CC1 and CC2 when needed.

When chart is complete, place live sts on holder or waste yarn.

Block pieces and weave in ends.

When both panels are complete, seam sides using MC.

Carefully remove holder or waste yarn and place live sts on longer circular needle. PM at one side seam to indicate the beg of the rnd, join CC3 – 182 sts.

Work in Garter St for 4”, ending after a Purl Rnd.

Next Rnd: Purl (this is a turning rnd).

Note: Switch to shorter circular needle, then DPNs as needed.

When you reach the end, break yarn and sew live sts to CO sts of I-cord.

Set eyelets into yo holes using eyelet setter and hammer.

Cut a piece of plastic needlepoint material the same size as base of bag. Sew into base of bag with needle and matching thread.

Cut length of rope into two equal pieces. Beginning at side seams, thread rope through eyelets. Pull up on center of rope to create handles. Tie overhand knots with both rope ends at sides and let rope fray after knots. 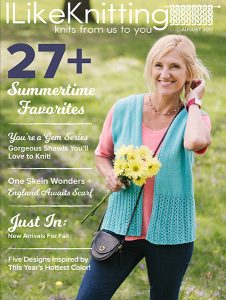