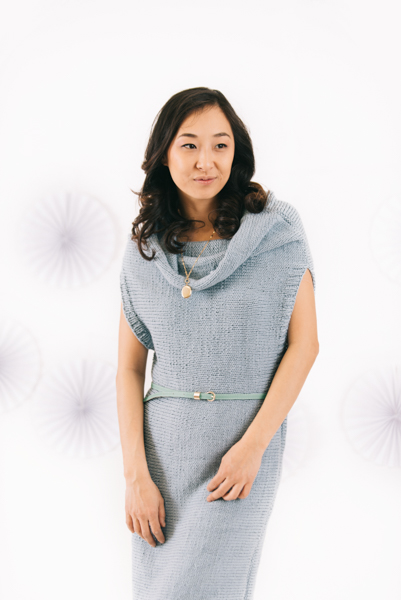 Ideal for knitters looking to branch out into more elaborate wearables, this simple tunic is knit from side to side using an aran weight yarn on a US size 8 needle. The end result is a fun-to-wear frock that’s perfect for lunch with mom. Pair it with tall boots and leggings or with bare legs and ankle boots!

This dress is worked in two rectangles, blocked, then seamed along the sides.

All slipped stitches are slipped as if to purl throughout unless otherwise noted.

The seams counteract the superwash fabric’s natural inclination to stretch when worn therefore, modification of the pattern using a provisional cast-on or seamless knitting of this pattern in the round is not recommended.

When adding a new skein of yarn, add it three stitches in from the edge so that the ends may be integrated into the small gap formed under the edge of the ridge in the transition of stitches between the third and forth stitch.

Join used throughout is a modified Russian Join whereby the new and old skein ends are only intertwined within the join by a half an inch of weaving into each. The remaining 2″ of the tail from the new skein and old are worked back into the edge under the ridge formed between the purl and knit of the third and fourth stitches or beneath the slip stitch edge where it meets the second stitch.

When working in the tails, remember the person who wears this might decide to wear the dress as a poncho so, be mindful both sides of your work could ultimately be seen therefore hiding the tails is critical.

Note: The stitch markers inserted into the cast-on row do not follow along as you knit, they remain in place on the cast on row to facilitate seaming later.

Note: The final ridge for the armhole takes about 15g of yarn to complete in size Small. Do not cut the yarn when done with the bind off. It will be used to sew the seams.

Blocking is accomplished by rolling up both panels of the fabric loosely and resting it in a sink of warm water, 110 degrees F. Remove the panels from the sink, unroll it, place it between two bath towels. Beginning at one edge, roll the three layers and squeeze the rolled-up set of three layers to release some of the water

Using the tapestry needle, guide the tail end along the single crochet edge between the two layers formed just beneath the chain and cut the yarn about 6” from the whipped stitches, while it is still in the work. This will hide the end of the yarn away from the edge of the seam.

Repeat on other side and from neck to shoulder on both sides. 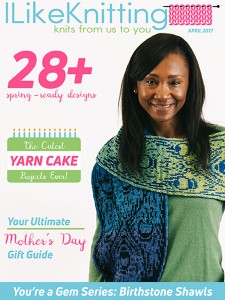