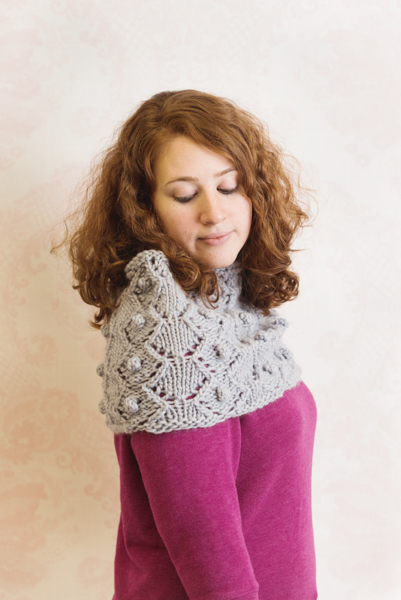 Get cozy in a dramatic way with this warm, bulky cowl. The structure of this stunning, yet simple pattern should get you noticed in the best way possible. This fluffy felt yarn was my most delighted choice for the big bobble motive to take the bobbles to extremes. This cowl can be knitted bottom up in rounds or in rows and sewn together in the end. The pattern offers both ways, so you can choose the way you prefer it the most.

Notions: 1 Marker (if decide to knit in the round); tapestry needle

Sl first st of each row with yarn held in front. The very last st of a row is always a knit st. The selvedge st is missing in the chart.

Bobble to be worked over 5 rows (even if you work the cowl in rounds) see separate chart:

This pattern is worked bottom up in rows and sewn together. Or can be worked in the round.

Next Row (RS): Having in mind that the Selvedge Stitch is not mentioned in the chart, start working 12-row rep of Big Bobble pattern, beg with Row 1.

Hold together with RS facing each other and sew selvedge sts together to close the cowl to round.

Weave in all ends and turn RS outside.

Send this to a friend
Hi,
I thought you might find this interesting:
Burst Your Bobble Cowl