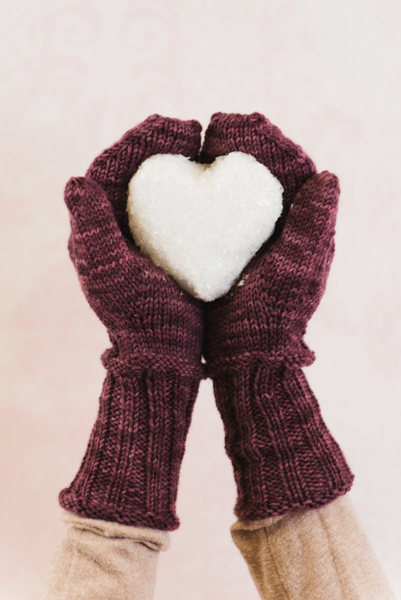 These mittens bring a touch of romance to the cold winter months. The heart and bobble panel is a nod to the Victorian era and the long cuffs are both dramatic as well as useful for staying put under coat sleeves.

Kfb – Knit into the front and back of the next stitch.

RT – Knit 2 sts together as to k2tog, but leave sts on left needle. Knit into the first st and drop sts worked off the left needle.

Continue in pattern while working the Thumb Gusset.

Work 3 sts before end of rnd and pm.

Note: You should now have 2 sts in between the new marker placed and the end of the rnd marker. These 2 stitch markers will designate your Thumb sts. Increases will be made on the first and last st within these markers.

You should have completed 5 (5, 6) Heart Cable repeats.

Cut a 10” tail and thread all sts onto tapestry needle. Pull sts taut and thread needle down through the center of the newly tightened stitches. Draw yarn back up through the stitch below and repeat a few times to securely tighten the top of the thumb. Tighten any holes that may appear at the base of the thumb with your yarn tail by threading yarn through hole on WS.

Follow instructions for Left Mitten until you reach the Thumb Gusset.

Work 4 (5, 6) sts after completing Heart Cable pattern, pm, kfb, kfb, pm, work to end of rnd. You should now have Needle 1 with your Heart Cable sts, Needle 2 with 2 stitch markers indicating your Thumb Gusset and Needle 3 with the end of row marker – 2 sts inc’d; 4 sts between thumb markers.

Work as for Left Mitten Decreases.