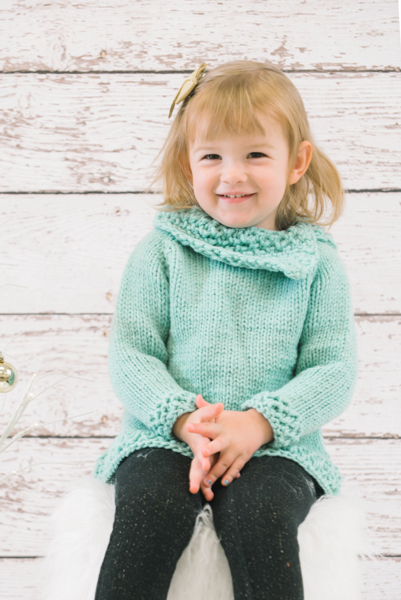 Bluebird Sweater is a top-down, girl’s pullover sweater with an A-line and split collar detail. The bee stitch collar creates a wide, stretchy neckline. Bluebird was inspired by the oversized sweaters worn by stylish mid-century girls, especially when paired with narrow, cropped pants and ballet flats. This sweater can easily be modified with three-quarter sleeves or to dress length.

Bee Stitch (worked in the round)

When working the collar, with yarn in front (wyif), slip the first stitch purlwise and knit the last stitch through the back loop (ktbl).  This will create a neat edge.

The collar is worked flat to its specified length, then the ends are overlapped to create the split collar. The sweater body begins with the wrong side (WS) of the collar facing so it can be folded down with the right side (RS) of the collar visible when completed.

With smaller needles and beg with WS facing, join by overlapping the first 6 sts over the last 6 sts. Treat these pairs as 1 st by knitting the front and back stitches together. Place a stitch marker after completing these 6 overlapped sts to indicate beg of rnd.

Divide for Body and Sleeves

With larger needles, begin Bee Stitch (worked in the rnd).

BO in purl stitch as follows: *P1, place it back onto left needle and p2tog with the next st; rep from * until all sts have been bound off.

Note: Use larger needles for the bind-off if tension is a concern.

Begin Bee Stitch (worked in the round).

BO as for Hem.

Weave in ends and block measurements according to yarn label instructions.

Send this to a friend
Hi,
I thought you might find this interesting:
Bluebird Sweater