This pillow is round and jolly, just like Saint Nick! It’s also a great way to get your home ready for the Christmas season.

The completed pillow will be 20” square, but the pillow insert used is 22” square to make the pillow extra plush.

Slip marker every rnd as you come it.

With circular needles and MC, CO 171 sts. PM and join for working in the rnd.

With CC2, CO 68 sts onto DPNs or circular needles using the magic circle method, placing marker every 17 sts. PM and join for working in the rnd.

Using CC2 and a tapestry needle, sew Belt Buckle to center of front of Pillow.

Weave in any remaining ends. 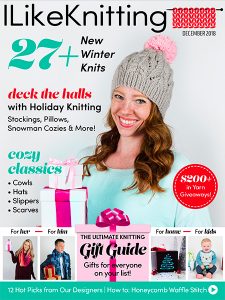