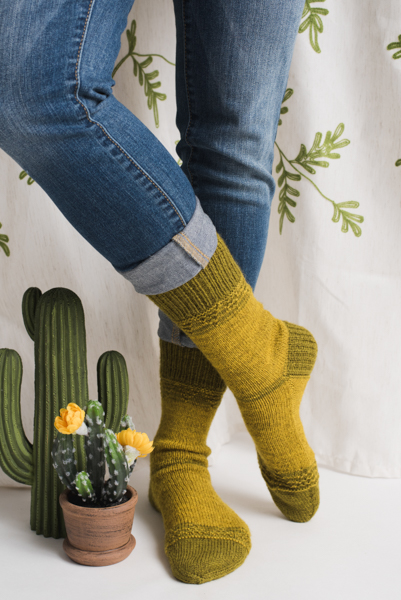 Simple and interesting, the Prickly Pear Socks have a variety of design features that keep the knitter on their “toes.” Worked from the top down, they start with a ribbed cuff, two-color slipped stitch design transitions and so much more!

This pattern is worked in the round from the top down with a heel flap and gusset.

The use of 4 DPNs (double pointed needles) is described throughout.

Change to CC, k around. Do not cut the CC unused strand.

Cont last 2 rows until there are only heel flap sts rem.

Return the sts from the holder to a needle. You’ve now got the instep stitches on one needle, and rem heel sts on a second, with two selvedge edges bet them.

K across the heel sts, do not turn the work.

Using a new needle, pick up 14 sts along the left side of the heel and k those sts. This will be referred to as Needle 1.

K across the instep (non-heel) stitches. This will be referred to as Needle 2.

Using a new needle, pick up 14 sts across the right side of the heel and k those sts. With this same needle, k half of the rem heel sts onto this same needle. This will be referred to as Needle 3. You will now have a small number of sts left on your needle, ready to be worked. Slide these onto Needle 1.

Dec Rnd: On the very next rnd, work a dec rnd as follows:

Using CC (the strand should already be in place) k the instep sts and p the sole sts until the foot of the sock meas 3” less than the length of the actual foot that will be wearing the sock.

Dec for the toe.

Alternate even k rnds and Dec Rnds as follows:

Cut the yarn leaving a long tail of about 12”, thread this tail on a yarn needle and pull the thread through the 8 sts, pulling them tight.

Feed the needle through the center point to the WS and sew in all the ends and trim excess yarn. 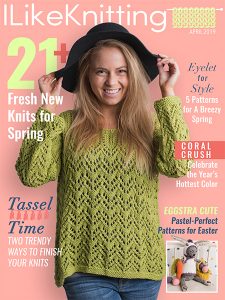 Send this to a friend
Hi,
I thought you might find this interesting:
Prickly Pear Socks