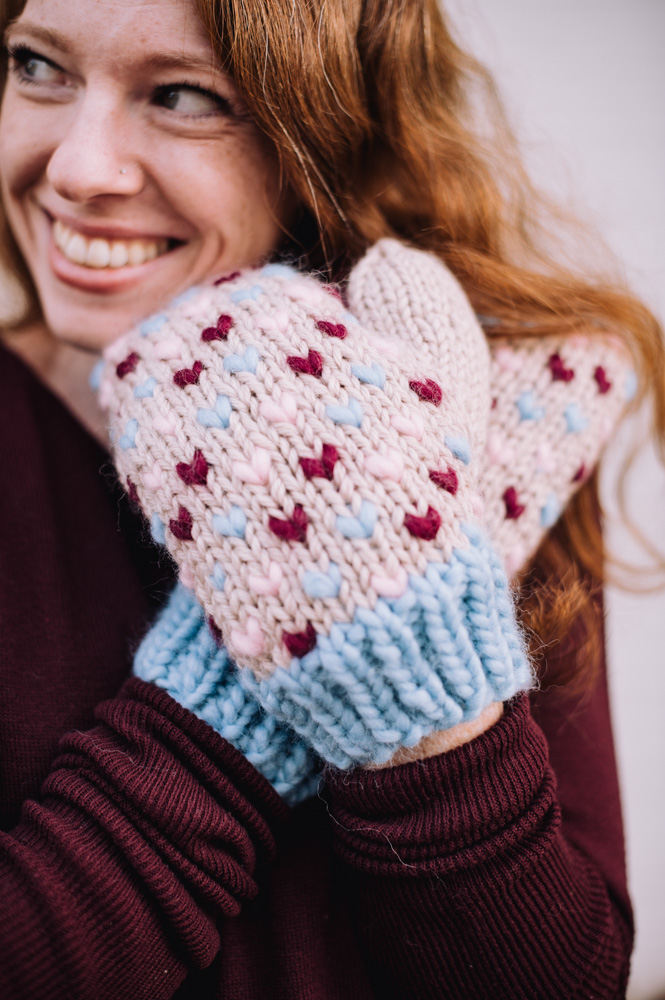 Simple, yet colorful, these classic thrummed mittens are worked from the cuff up, on a neutral background, with three alternating shades of colorful thrums. Easy enough for a first-time thrummer, this is a traditional pattern you’ll come back to again and again. Great as a last minute gift, there’s plenty of room for adaptation with this pattern. For a tonal look, work the mittens using shades of the same color for the thrums and background, or go wild with a random assortment of mixed colors! The thrums create a fuzzy lining on the inside which makes these mittens extra cozy.

Before beginning, you will want to make your thrums. For this pattern, you will be using three colors of thrums. Cut 84 five inch long lengths each of colors CC1, CC2 and CC3. You will be using half your thrums for each mitten. To make the thrums fuller, pull the fibers apart slightly, to create fluffier, more roving-like thrums.

Using smaller needles and CC1, CO 26 sts, pm and join to beg working in the rnd.

Note: As you’re adding the thrums to your work, alternate colors, beginning with CC1, then CC2, then CC3. Continue to rotate between each color, to create a mixed effect on the mittens. For example, if your current thrumming round ends with a CC 2 thrum, then your next thrumming round will begin with a CC3 thrum.

Note: The stitches between the marker and the end of the round will be the stitches for the thumb gusset. The number of thumb stitches will increase as you continue to work the hand.

Place the 15 thumb gusset sts onto a holder or scrap yarn. You should now have 28 active hand sts rem.

The mitten should now measure about 10”. If you wish to make the hand longer, add additional reps of Rnds 1-4 until you reach ½” shorter than the final desired length, ending with Rnd 1.

Place the first 4 sts on one DPN and the last 4 sts on another DPN. Cut the yarn, leaving a 12” tail. Thread the tail onto a tapestry needle and graft the two sets of sts tog, using Kitchener Stitch.

Place held 15 thumbs sts back onto larger needles, pick up 1 st from the mitten and set up to begin working in the rnd with MC held double. (16 sts)

Cut the yarn, leaving a short tail. Thread the tail onto a tapestry needle, then thread the needle through all the rem sts and cinch tightly.

Make the second mitten the same.

Weave in all yarn ends. 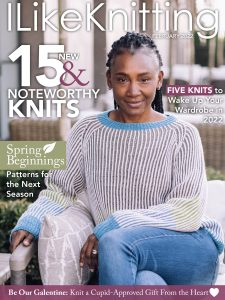