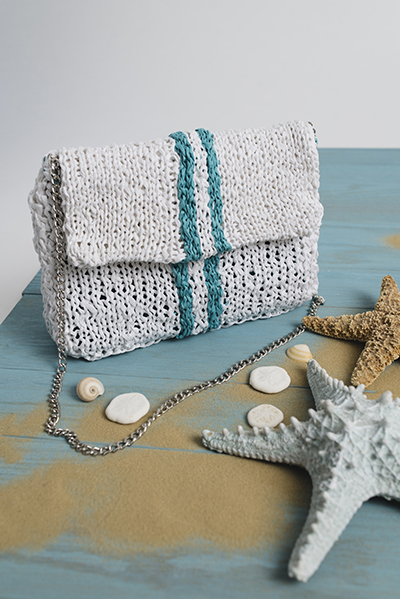 With a bold central stripe, this beach friendly clutch features a reinforced base making it ideal for any beachtime essentials. Plus, it uses one of our favorite new yarn types: raffia yarn.

2 bobbins (optional), pliers with round tips for attaching clasps and feet (optional)

The base of this bag is worked flat.

The sides are worked in the round with the corners turned using a single purl stitch through which a seam will be placed on the WS and RS of the bag to reinforce the corners and aid in the clutch shaping.

The stripe is worked in rounds, wrapping the CC around the MC during color transitions to minimize gapping where colors transition.

When picking up the CC on each round, float CC behind MC such that the float remains on the WS of the work. This float will be covered up by the lining of the bag but should be kept at a consistent tension to ensure the width of the stripes remains consistent.

The last st of the flap is ssk to help maintain a more consistent line when the 3-needle bind off is done on the WS.

Before starting, take half the CC and place it on a bobbin.

BO 15 sts, do not bind off last st, it will become the first st of the first rnd.

Slide 1 st from left to right needle, pm, for end of rnd, turn work so WS of Base is facing:

Move end of rnd marker to the last st so as to secure it to the work. Leaving the back 32 sts unworked, work the front i-cord BO flat as follow:

Cut the working yarn and that of the CC stripe on the Front, leaving 4″ tail, and weave tails into CC i-cord.

Turn work such that the marked st is the first one on your left-hand needle and the right-hand needle holds the sts just CO, pass 1 CO st to the left needle and k2tog with marked st. (67 sts)

Return markers to the cable as follows:

Cont in rnd in patt maintaining the CC stripe on the outside of the bag until piece meas 5″ from CO edge of flap, on last round, ssk on first 2 sts of rnd. (66 sts)

Transition half of the sts to a second circular needle of same size.

Carefully turn flap inside out.

Turn flap again such that RS is facing.

Turn body of bag such that WS is facing.

Using MC held doubled and tapestry needle, begin at CO edge of Base and sew a seam along the first purl ridge, using two whip sts per purl to form seam. Rep along each purl ridge. Weave in tails.

Turn work such that RS is facing.

Using MC held doubled and tapestry needle, begin at CO edge of Base and passing needle through one knit stitch on each side of the purl, sew along same seams from the RS.

Pin zipper in place such that one side is aligned to the first rnd of the WS of Flap and the other is aligned on the WS along CO selvedge edge.

With shiny side of interfacing facing, place the interfacing onto a hard heat proof surface or ironing board such that the 10″ sides are parallel to each other and the smaller piece is between the two larger ones with a 1/16” gap between each.

Iron per Pellon instructions to adhere the interfacing to the fabric using dampened pressing cloth.

Fold edges of fabric over the WS of the interfacing and iron into place such that the selvedge edge of the fabric is folded in upon itself, i.e: there are no raw edges showing on the RS of the lining.

On the knit bag, attach the feet per manufacturer instruction approx. 1″ from the edges along each corner of Base.

With RS inside of Flap facing attach the three magnetic clasps evenly approx. ½” from the edge. Following manufacturer directions secure the clasps and attach the mating pieces to the RS of the front of the Body at the same interval down approx. 2½” from the i-cord bind off.

With the RS of the lining facing and RS of knit bag facing, insert lining into bag. The edges of the lining will rest along the seams formed by the sewn purl seams.

Using coordinated color of sewing thread and sewing needle, secure lining in place along the line formed by where the i-cord bind off wraps over itself along the WS of the bag.

Using coordinated color of sewing thread and sewing needle, secure lining along line formed by the line where the zipper meets the WS of the flap.

Secure chain inside the bag using sewing thread along the inside edge where the seams meet the i-cord bind off.

Send this to a friend
Hi,
I thought you might find this interesting:
Offshore Raffia Bag