I taught myself to knit as a teenager, and having no one around me to show me the ropes meant I had to figure things out for myself. There are a few things I’ve learned along the way that I wish I had known earlier since they would have saved me a lot of time

I taught myself to knit as a teenager, and having no one around me to show me the ropes meant I had to figure things out for myself. There are a few things I’ve learned along the way that I wish I had known earlier since they would have saved me a lot of time and aggravation. Maybe these will help prevent you from making a similar mistake, or maybe they’ll just give you solidarity in knowing that you can get past lots of beginner’s mistakes.

The first sweater I ever knit was fashioned out of plain brown yarn that I had bought on sale. I hadn’t given much thought to the colors I wanted and was more concerned with trying out the pattern to make sure I could do it. The result was … okay.

What I wish I had known: Dull brown yarn gives you a dull brown sweater. For a really pretty sweater, you need to get really pretty yarn. All your hard work won’t end up mattering if you knit with dull yarn and end up not even wanting to wear or use your item. Take the time to really choose your yarn.

I returned to knitting in 2007 after not working a stitch for close to 25 years. I was afraid I wouldn’t remember anything, but once I picked up the needles, it all came back to me. I started my old familiar movements to cast on, and off I went.

What I wish I had known: Knitting is timeless, and muscle memory really works. You might need to look things up as a refresher and you might be a little slower and uncertain to start, but knitting, like riding a bicycle, is something that you never forget.

I kept hearing that handmade socks were the thing knitters were going crazy over, but to me, socks were scary. Using those little pointy needles and trying to work out that mysterious curve at the heel intimidated me, and I figured they must be really difficult to knit.

Then, I found instructions on using two circular needles, a free basic sock pattern, and an article called Sock Anxiety. I ordered my sock yarn and my two needles and, with some trepidation, started my first knitting in the round project. And you know what? I figured it out. The mystery of turning the heel revealed itself to me, and my first socks turned out pretty well. They even fit!

What I wish I had known: Knitting socks isn’t that hard if you can follow instructions. There are plenty of tutorials out there that range in difficulty for even the newest of knitters.

My next adventure was to try fancy variegated yarn. I also wanted to work lace patterned socks instead of plain ones this time.

So, of course, I tried tackling both with one project and, you guessed it, the lace pattern and the self striping sock yarn were fighting it out. When all was said and done, you couldn’t really see the lace, or appreciate the pretty yarn.

What I wish I had known: Not every yarn goes with every pattern, and there’s actually an art to matching the right yarn to the right pattern. If you want to show off an intricate pattern or stitch motif, definitely stick with plain, solid yarn. If your pattern is more simple and straightforward, give the crazier variegated colorways a shot!

Although I now always had a pair of socks on the needles, I yearned for larger, more substantial projects. When I learned that my son and his wife were about to buy a house, I decided that an afghan would be a great housewarming present.

What I wish I had known: Knitting an afghan that uses 10 balls of Cascade 220 means 2200 yards of knitting, or over 150,000 stitches. That’s a lot of work, so make sure to routinely go over what you’ve done to make sure your work is consistent so you don’t do what I did and have to re-knit everything. 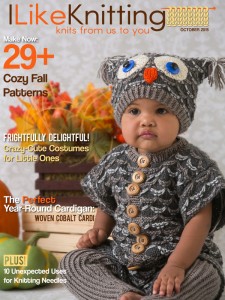