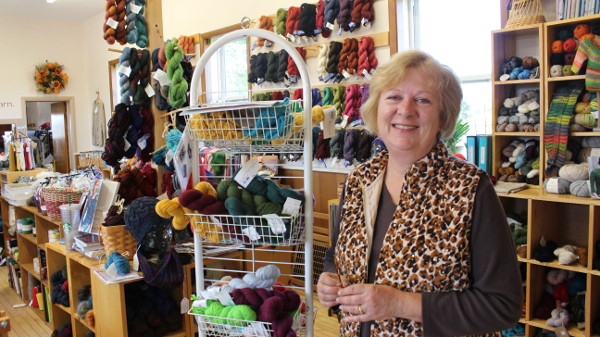 Surrounded by corn fields in Delevan, WI, Studio S Fiber Arts sits nestled between an inn and a winery — which sounds like a knitter’s dream vacation. While the one-room schoolhouse may have been your grandmother’s yarn shop in its early days, Studio S Fiber Arts is certainly keeping up with the times. Debbie Fuller,

Surrounded by corn fields in Delevan, WI, Studio S Fiber Arts sits nestled between an inn and a winery — which sounds like a knitter’s dream vacation. While the one-room schoolhouse may have been your grandmother’s yarn shop in its early days, Studio S Fiber Arts is certainly keeping up with the times. Debbie Fuller, owner, says her shop attracts customers from across the Midwest. Some even bring their own freshly sheared fibers from local livestock, she said.

ILikeKnitting.com met with Fuller in her charming yarn shop stuffed with goodies to talk about what else makes this quirky yarn shop stand out in the age of online knitting communities.

What’s the story behind your oddly-located yarn shop?

We’ve been here almost 20 years. When I retired from AT&T, I decided to focus on knitting. The charming lady who owned the shop was getting up in age and wanted to sell, and I was a regular customer. This building was once a one room schoolhouse.

The previous owner opened it up as her own personal weaving studio. She retired, and I opened up in June 2012. The original structure of the late 1800s, post-Civil War schoolhouse is here, and a kitchen was added in the 1960s. I don’t know if it’s a registered historical landmark or the name of the original school. Sometimes people get lost in the corn because besides the winery across the street, we’re alone out here.

What makes your selection stand out?

We try to have a selection of everything [when it comes to yarn]. It’s hard to not buy only the styles that you love. One of the most interesting things we see is people walking in with fleeces sheared from animals [to sell to the shop.] We get a lot of customers from northern Illinois. We see quite a few men who knit and crank out knit-wear for their families.

When and how did you learn to knit?

I learned how when I was 10 and I’m 58, so you can do the math, honey. [Laughs] I took a class at Sears. We made a horrible sweater and we didn’t even know what we were making. We were kids and didn’t question the beastly woman who taught us! I didn’t become a serious knitter until I hit 40. Before that I was busy with work and kids, and I made a lot of hats, scarves, mittens. I finally felt like a knitter when I made my first pair of socks. I love the math and construction of making socks and that you can make something so three-dimensional.

Why are you impressed when someone can knit a sweater?

People underestimate the importance of knitting a gauge swatch, and when they’re 90 percent done, they realize it won’t fit them. There are so many other things that can go wrong when you’re knitting a sweater. The proportions are wrong in the pattern, or they knit the wrong size, or they knit a sweater that’s unflattering for their body type. But when they can make one, it’s such an achievement. It’s really satisfying to see people’s confidence grow.

How has the internet changed the knitting community?

I definitely see the internet as being the future of knitting. There’s sharing of information that was never possible before, and it’s bringing the community of knitters closer. People love the comaraderie [of the online knitting community], and getting responses and praise from other knitters. It’s hard to stock books, so we try to teach some customers to search for crochet and knit patterns online. We have a big screen television in the back so we can put on [tutorial] videos. It’s great to see so many good quality videos available because it makes it easier for people to learn. It’s also nice to see so many patterns in color now. We’ll also pass around an iPad as we’re looking up patterns and yarn.

What do you see trending this spring?

[2014] was the year of the cowl. We see lots of hats. People tend to start making gifts after Labor Day. I’m seeing blue making a comeback. We’ve had a lot of customers looking for white, and up until now we haven’t had much white. It was a lot of naturals and beiges. But they’re using white for colorwork and constrasting it with other colors.

What type of yarn is taking off?

More and more people are interested in linen yarn. It usually turns people off because it’s rough in the skein. But I tell them to knit it, put it in the washer and dryer, and you’ll have an amazing garment for decades. It wears like iron. Some people are sensitive to knitting with linen because it’s so rough, but customers have given me this tip: wind it three times before you use it. That will loosen it up.

What do you think of arm knitting?

It’s very cool. Anything that lets people express themselves with fibers is great! Many mothers and grandmothers have come into the shop and said their daughters and granddaughters are learning to arm knit in Girl Scouts and other clubs.