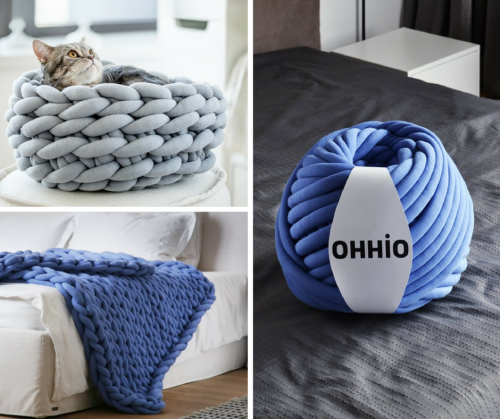 If you have fallen in love with the chunky knit trend, then Ohhio yarn will be your next addiction. Knitting with arms instead of needles, the Ukraine-based business has been selling yarn as well as luxurious blankets, cowls, and other chic styles since 2015, and the demand for their simple and elegant brand has rapidly grown since then.

Ohhio has recently created a Kickstarter for their brand new, patent-pending yarn called Braid, a revolutionary addition to the chunky knit scene: it’s vegan, hypoallergenic, stuffed with hollowfiber filling, and perfect for novices or pros to finally be able to create the Ohhio look themselves. Yes, it does look like knitting with irresistible cloud yarn, and Anna lets us know that the final products are as cozy as they look. Here’s a sneak peek of the email interview I Like Knitting had with Anna Marinenko, the founder of Ohhio. The full interview will be coming soon to an upcoming issue of ILK.

Q: How did you decide that chunky knit would be the signature look of Ohhio?

A: The very first Ohhio blanket was made by accident. I had a huge skein of wool, but no needles, and a free afternoon. I decided to use my hands to knit something, and a few hours later, I had a chunky knit blanket. I put up a photo of it online, and the response was overwhelmingly positive. I knew then that I’d be making chunky knits for the near future.

Q: Since its beginning in 2015, what have been the biggest moments for Ohhio—such as any learning curves in the launch process or any memorable interactions with customers that encouraged you to keep producing your products?

A: The most memorable moment came at the end of February 2015, when orders started coming in in massive numbers. I still have no idea what to attribute it to, but the project finally felt like a success. It came as a massive relief, and was hugely satisfying. I’m still riding that wave.

Q: This style has become incredibly popular lately. What do you think has made knitting fashionable and appealing to all generations?

A: Knitting is incredibly down to earth and simple. I think those things are eternal, and simply cannot go out of style.

A: It’s machine-washable, more durable, and still very soft and light. We’re in the final stages of getting a patent for it, so you’re guaranteed to be getting something completely unique.

Q: I love your Kickstarter video, which really shows off how versatile Braid is. I can’t help but wonder how hard it is to resist cuddling with it in the office! On a more serious note, how did you discover the need for a product like Braid?

A: Braid is pretty irresistible. We have throws around the office, and when they’re not being used in photoshoots, they’re definitely getting some cuddles. I discovered the need for Braid from my clients. In addition to the people who wanted something vegan and hypoallergenic, I saw messages from knitting novices who wanted to make their own Ohhio blanket using the wool we sell, but were afraid of the difficulty of working with it. Ohhio Braid creates a nice and easy entry point for newbie crafters, and I’m excited that more people can try it now.

Q: What prototypes did you work through before you arrived at the final version, and how long did it take to get there?

A: The road from idea to finished product took 11 months in total. We started making prototypes in March, and had the final version in September. The whole process was arduous since we tested a million combinations before achieving a satisfying result. We tried every mix of cotton, linen, and synthetic fabrics possible. The final result is a cotton shell with an elastane and polyamide thread injected for plasticity, and a super soft hollowfiber filling.

Q: What is your personal favorite thing to knit with Braid yarn?

A: Of the existing Braid products that we have, I really like making the stress balls. They’re small and fun to make. But my favorite part of working with Braid is all the room for experimenting it creates. I made a chunky pillowcase recently! It’s so big I’m not even sure it qualifies as a case, and not an actual pillow.