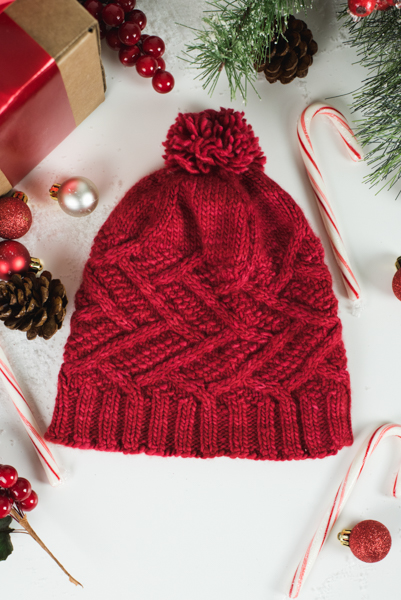 With an eye-catching design and a red pom pom to match, this is the hat for the guy on your list that isn’t afraid to stand out. This hat coordinates with the Willow River Cowl from the August 2018 issue.

The hat is worked top down in the round, beg with the Emily Ocker circular cast on. The pattern is both written and charted.

CO 8 sts on a crochet hook using the Emily Ocker cast on. Transfer the sts to the smaller sized circular needle or 2 DPNs.

Split the 8 sts equally across the two ends of the circular needles or the 2 DPNs (4 sts on each needle).

Note: You will now use lifted increases to shape the crown. You will increase by 8 sts every alternate round.

Switch to larger sized needles and work the crown shaping as follows:

Remove all markers except beg of rnd marker. Your crown shaping is now complete.

Using the written or charted instructions, work the hat as follows:

Continue ribbing for about 1.5” or to desired length.

BO all sts using the Stretchy 2×2 Rib Method as follows:

Step 1: P2 sts, insert left needle into the back of the 2 sts you just worked, wrap the front needle and p2tog.

Step 2: K1 st, insert the left needle into the front of the 2 sts you just worked, wrap the back needle and k2tog tbl.

Step 4: P1 st, insert left needle into the back of the 2 sts you just worked, wrap the front needle and p2tog.

Rep Steps 2-5 until you have bound of all sts. 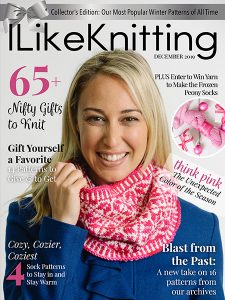 Hi,
I thought you might find this interesting:
Willow River Hat